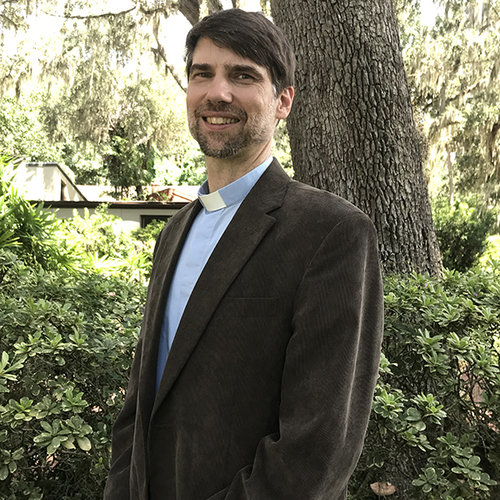 Fr. Tom was born in Washington D.C. and grew up in northern Virginia. He earned his undergraduate degree at the University of Virginia, then studied for his Divinity degree at Regent University in Virginia Beach. It was there that he met his wife Kathleen, a Florida native who was studying missions. Tom and Kathleen joined the Episcopal Church in 1999 in Shreveport, LA, where Tom served as the Director of Christian Education at St. Paul’s. He was ordained in the Diocese of Albany in 2002, where he became the Rector of St. Augustine’s in Ilion, NY, until 2009. He then served as Associate Rector at the Church of the Ascension in Lafayette, Louisiana through 2013.
Fr. Tom, Kathleen, and their five sons moved to Leesburg in January 2014 when he became the current Rector of St. James. In March 2015 they welcomed their baby daughter, Lucienne. Their five sons are: Seth Peter (now married to Bethany), Isaac, Joel, Elijah, and Benjamin. Fr. Tom enjoys photography, painting, fishing, and free time with his family. He loves disciplining God’s people, teaching God’s word, and sharing the love of Christ. The community of St. James has been an incredible blessing to Fr.Tom and his famil and will be to you as well!
NEED TO MEET WITH FR. TOM?
If you would like to know when you can come by the church to meet with Fr. Tom, he will be available on Tuesdays and Wednesdays from 10:00 to noon, and Thursdays from 11:00 to noon. If you would like to arrange for other times to meet, you can contact him by phone or text at (352) 643-1182, or by email at frtrees@stjames-leesburg.org